Efficiency in the FileMaker Script Workspace
Recent versions of FileMaker Pro have greatly improved the efficiency of writing and editing scripts in the Script Workspace. If you have some experience writing scripts, and you know what you want, scripts can be compiled very quickly and efficiently.
When creating script steps, simply use an acronym for the step or start to type a word from the script step. For example, if you want to add the commonly used script step Go To Layout, you could type the acronym gtl or start typing the word layout. A list of matching script steps appears – arrow up/down to the one you want, and press return to select the highlighted script step. 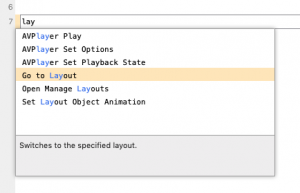 It is good practice to add comments to your scripts to document blocks of code or explain usage and logic. To create a comment, simply type # (shift-3), and then start typing your comment. While you cannot insert line breaks in a comment, long comments will wrap to a new line and display as multiple lines in your script.
To add a new line to your script below the current active line, simply press the return key. If you want to add a line above the current active line, press shift-return – very useful for adding new lines before the first line.
Many script steps have settings. Where there are multiple settings, you can move between the settings using the tab key or the left/right arrow keys. Once a setting is active, you can usually access options by pressing the spacebar. This will either open a list, toggle a setting, or jump into a dialog. This is particularly useful for toggling the On/Off option for many script steps.